Please follow the steps in the Charitable Donations: Overview article for enabling the charitable donations feature in your projections.  The following provides details on insurance donations specifically.

In the year of the donation, Snap will either apply the tax credit that year or carry it forward up to 5 years to claim it in the most advantageous way.  You will be able to view the donation amounts that have been carried forward each year as well as the donations that have been already claimed.  Snap will also display a comparison of the total tax based on whether or not a donation has been made.

In this first case, the premiums paid by the policy owner do not qualify for a donation tax credit.  The tax credit is applied upon the donor's death, when the charity receives the death benefit.

Here is an example of a Whole Life Policy for which a charity is designated as the beneficiary. 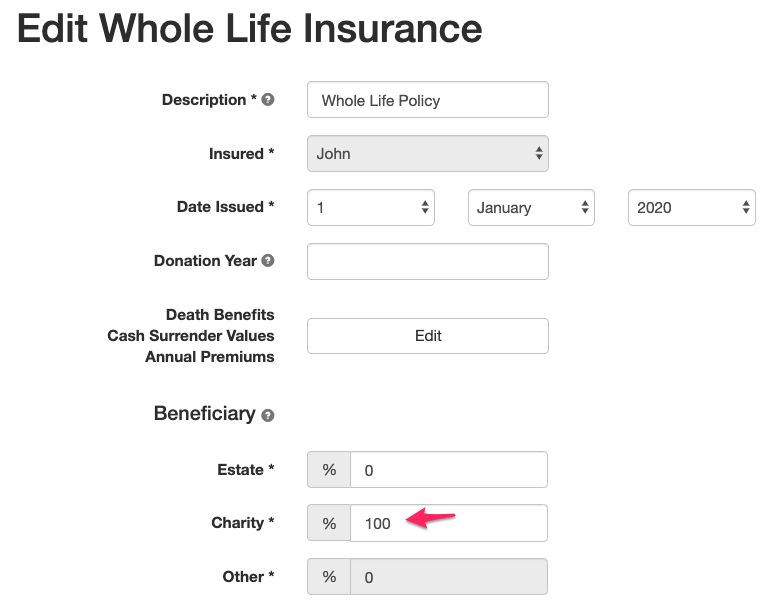 Make sure to select Charity as one of the beneficiaries.

In the final year of the projections, you will see a donation for the amount of the death benefit.

The charity is assigned as the owner of the policy and as the beneficiary.

The insurance policy ownership assignment to the charity may occur at different times.

a. The donor assigns ownership of a new policy to the charity and continues to pay the premium.

If this is the type of donation you wish to set up, enter the donation year as the same as the date issued year for the policy under the Insurance Policy details page.

In this example, the policy is donated in the same year that it was issued. All insurance premiums are considered to be charitable donations. 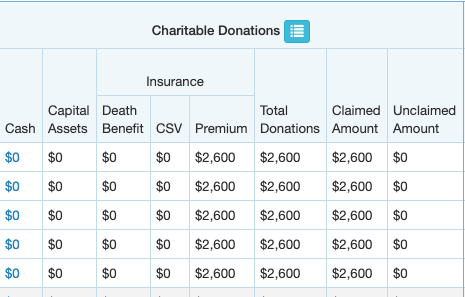 b. A transfer of ownership on an existing policy is made to provide the donation in a specific year