There are many definitions of Nominal dollars and Real dollars.

We decided to define those two columns based on the book "Secrets of Economic Indicators, The: Hidden Clues to Future Economic Trends and Investment Opportunities" by Bernard Baumohl (source). 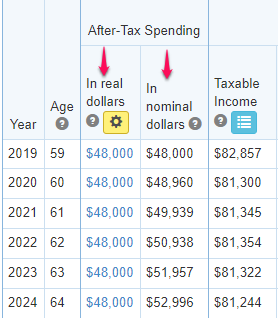 Anything measured in dollars can be looked at in two ways. Nominal dollars (also referred to as current dollars) represent the actual amount of money spent or earned over a period of time. For example, factory workers receiving total pay hikes of $500 million, or a 5% increase, in the last 12 months is an example of figures given in nominal dollars.

However, nominal dollars give you only part of the story since inflation can distort these figures.

In the example above, the factory workers may have seen their pay jump by 5% in nominal terms, but before anyone celebrates, someone should ask this question: "What if the price of goods and services (i.e., inflation) rose by 4% during that same period?" In that case, the wages of these workers rose by a less-than-impressive 1% in real (or constant) dollars. In other words, the actual increase in purchasing power these workers gained from their pay hike was far smaller than 5%.

When economists and investors want to compare the performance of the economy over different time frames, they generally look at both measures—nominal and real. They note the change in the size of the economy in nominal dollars because that points to what individuals, businesses, and the government actually spent. However, to find out if the economy genuinely expanded by producing more in quantity or volume, economists and investors look at the numbers in real-dollar terms.