Starting the projections in the next year

How to change the Start Year of the Projections

Asset amounts and debt balances entered on the Assets and Debts pages are considered to be beginning of the year values for the start year of projections. Therefore, as we near the end of the year you may wish to start the projections in the following year. Here are more details about the assumptions made regarding the timing of withdrawals and contributions.

You have 2 choices for the start year of projections; the current year or the following year. You can adjust this year under Scenario Setup -> General. 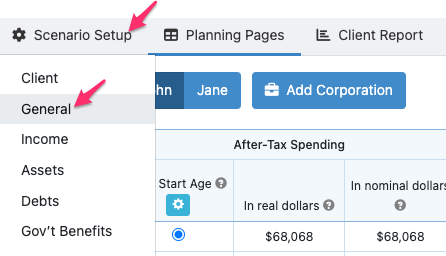 On this page, select a year from the drop-down box Start Year.

What happens to the projections when you open them in a new year?

When the year turns over and you open a scenario that was created the previous year with the new year as the start year: