In Snap, you can illustrate the surviving spouse's financial situation after the death of their spouse (a Surviving Spouse Scenario). Such a situation would occur in circumstances where you have ended the projections for each spouse in different years.

Creating a Surviving Spouse Scenario can be a very useful projection to discuss with your clients.  Upon the spouse's death, many factors will impact the surviving spouse's financial situation. First, the surviving spouse will lose any income-splitting options. All registered accounts are consolidated and now the RRIF/LIF income will be taxed under the survivor only. The survivor will no longer have income from their spouse's OAS and if they are already receiving the maximum CPP/QPP benefit themselves, they will lose their spouse's CPP/QPP because they won't be entitled to the CPP/QPP Survivor Benefit.  By being forced to take minimum RRIF withdrawals that can't be split with another person, the surviving spouse's OAS may be clawed back. As a result, the survivor may end up bringing in less cash flow and also paying more in tax.

Snap Projections can easily show the impact of such a situation. To model the earlier death of one spouse, go to the General Settings page and change the final year of the projections for one spouse. You may wish to make a copy of the scenario first.

This is what happens in the projections when one spouse's projections have ended before the other's:

Technical details of the asset rollover: 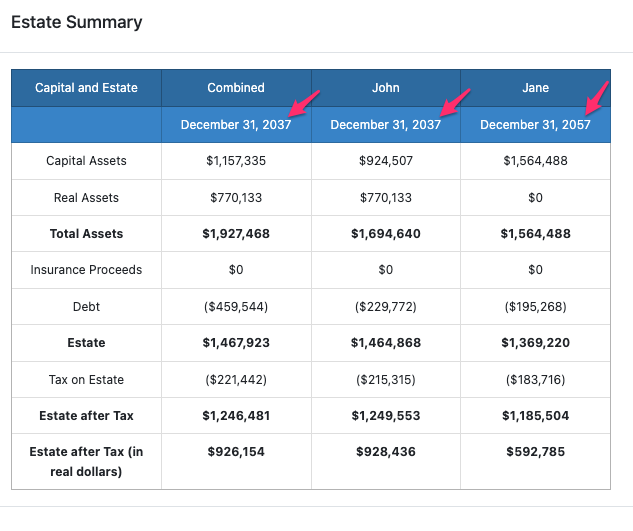 The Tax on Estate for the first spouse to die in the projections is provided for illustration purposes only.  It shows what the tax on that person's estate would have been if there was no surviving spouse. In the example above, the Tax on Estate of $215,315 which is displayed for John is not actually paid.  Instead, John's assets are rolled over to Mary.

NOTE: If you wish to avoid modeling the surviving spouse scenario, please make sure to end projections in the same year for both spouses.